What do we mean by "rural"?

The U.S. Department of Agriculture's Economic Research Service (ERS) classifies each of the 3,142 counties in the U.S. into one of nine rurality categories, shown in Table 1. These Rural-Urban Continuum Codes are based on whether a county is located in a metropolitan or non-metropolitan area, using the Office of Management and Budget's 2013 statistical definitions. After differentiating counties by metropolitan/non-metropolitan areas, Rural-Urban Continuum Codes define counties by their population size and proximity to urban areas. We consider "rural" counties to be those with codes of four or higher, representing all non-metropolitan counties in the United States.

Each of the 3,142 counties in the United States clusters into one of 625 distinct "commuting zones." Recognizing that people often cross county lines to live, work, and commute, the U.S. Department of Agriculture's ERS used U.S. Census Bureau's journey-to-work data to measure the integration of social and economic activity between counties. Figure 1 illustrates how six counties cluster together to form a commuting zone around the area of Wausau, Wisconsin. 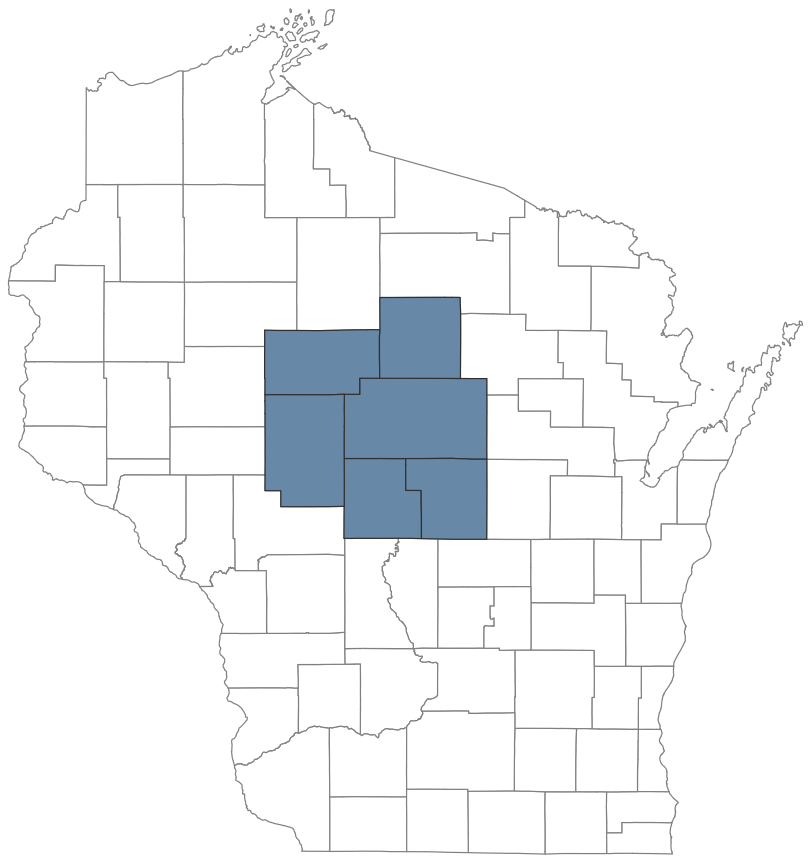 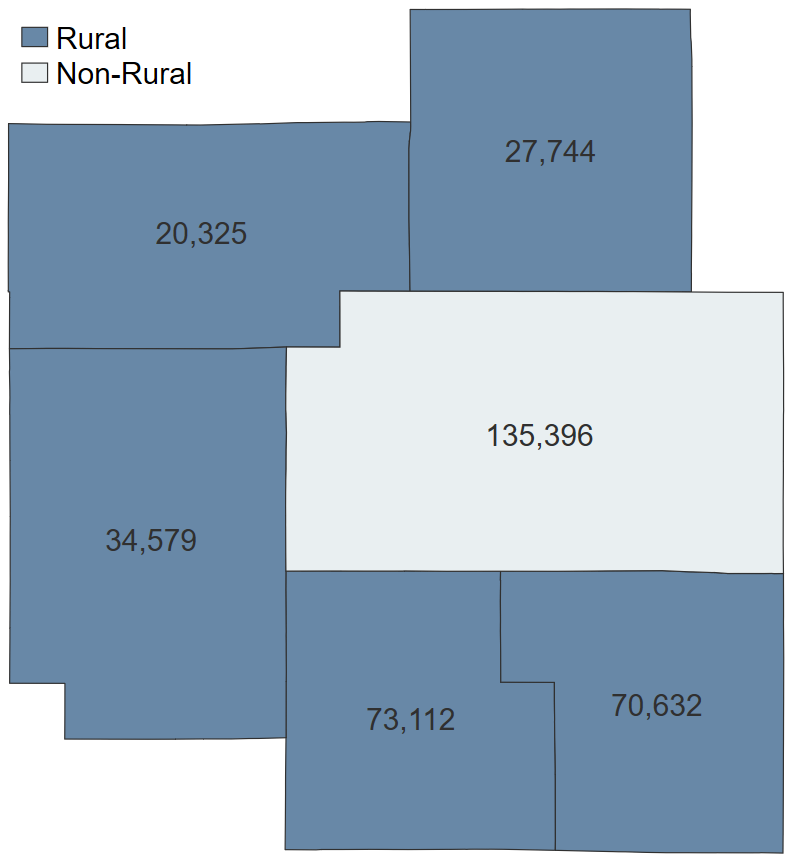 What do we mean by "postsecondary institution"?

We define postsecondary institutions using IPEDS data merged with data from the U.S. Department of Education's Database on Accredited Postsecondary Institutions and Programs (DAPIP). DAPIP provides the street address of accredited parent and child institutions and includes "additional locations." These "additional locations" provide a wider and more complete list of where college opportunities are located: the cleaned DAPIP dataset includes 24,455 total locations while IPEDS includes roughly 7,000. Figure 3 illustrates the benefit of merging IPEDS with DAPIP, where the left panel shows the IPEDS "parent" and "child" locations of Wausau, Wisconsin's commuting zone and the right adds all additional locations from DAPIP. According to IPEDS, there are only four colleges located in this commuting zone while DAPIP counts 63 locations that include various types of offerings outlined in more detail below. 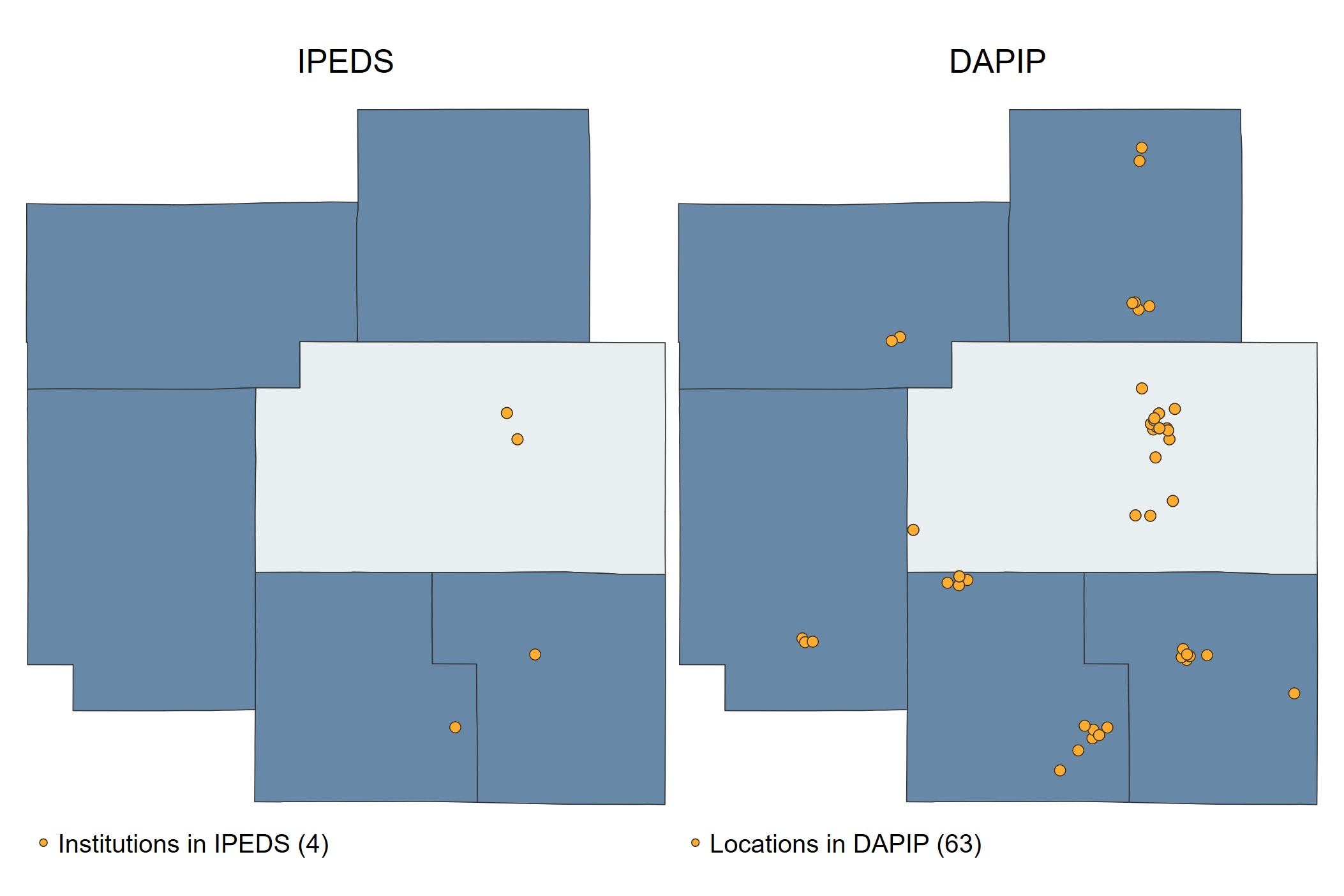 Our research team analyzed this novel dataset in three distinct ways. First, we geocoded each DAPIP location based on its street address and then merged those locations with their respective commuting zone. Second, we ran a word-frequency query (using NVivo software) on each location's name. Third, we used text-based algorithms and manual coding to apply those thematic word clusters to each DAPIP location, resulting in the following list of location types:

DAPIP reports three types of locations for each observation in its dataset: institution; additional location; and site. An "institution" is a main campus which serves as the primary contact for accrediting agencies. Unlike the unique identification number colleges use in IPEDS (e.g. "UNITID") to signify the holder of the PPA, the DAPIP file includes locations where instruction occurs. An "additional location" is defined as "a facility that is geographically apart from the main campus of the institution and at which the institution offers at least 50 percent of a program and may qualify as a branch campus." These would only appear in IPEDS if the location held its own PPA, which is often unlikely, meaning we are able to identify many more "additional locations" where instruction occurs. Finally, DAPIP's data documentation lists a "site" as "a location used for the supervised practical training of advanced students or recent graduates in areas such as medicine, psychology, and dietetics. Or location used for the specialized clinical training of physicians." Because locations deemed "sites" serve a very specific purpose for training of advanced degrees, we excluded them from this tool.

Code for all pulled in lower- and upper-case instances of words or phrases; words separated by semicolon.

DAPIP is an unaudited dataset which means there are likely to be inconsistencies in how data are reported. While our line-by-line review resolved many of these issues (e.g., typos in names or locations) the dataset is not without limitations. Additionally, our procedures for flagging each additional location – and the 8 types of "additional location" we identified – should be understood as a first attempt at classifying these places that to our knowledge have been underexplored and unevenly documented in the research literature. Ultimately, we conducted multiple rounds of quality control, both manually and with text-based algorithms, resulting in 24,455 observations for this analysis.